Joyce Glassnap and Georgia Damon were best friends at Roosevelt Junior High School.  It was about a half-mile from Joyce’s house so it was an easy walk for her.

TOP RIGHT:  Georgia (left) and Joyce (right) show off their new circle skirts shortly after the war was over (about 1947).  During the war years there were shortages of everything, including fabric, so the clothing styles reflected this in the amount of material they used.  Skirts had been shorter in length and not as full.  After the war was over, the designers went whole-hog in their new styles, using extravagant amounts of fabric.  Circle skirts became popular for girls.  These were the forerunners of the poodle skirts, which later became so popular in the ‘50s.

BOTTOM LEFT:  Joyce and Georgia pose in front of the school.  Slacks or jeans could not be worn in the classroom, so if the girls wanted to tumble at recess or after school they had to cary their jeans to school and put them on for such un-ladylike activities.  They were quite the tomboys, so they did, but Joyce’s skirt hem still managed to get ripped!  Note the ever-popular kerchiefs on their heads.  We thought they’d always be in style.

BOTTOM RIGHT:  Joyce takes a turn on Georgia’s bike with Georgia’s little Pomeranian dog on it’s pillow in the basket.  They’re in front of Joyce’s Wisconsin Avenue home.  Joyce rode a lot of horses in that fringed, leather jacket. 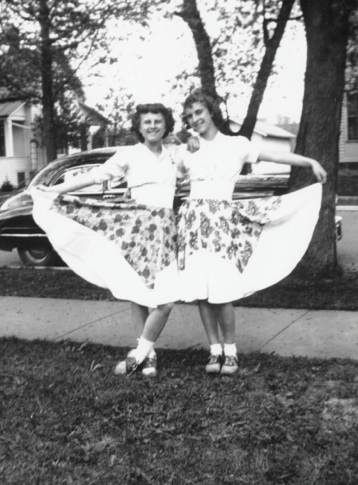 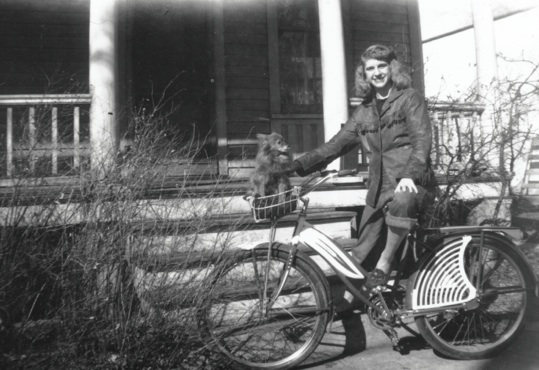